Opinion: Doctors must reach out to colleagues suffering in silence 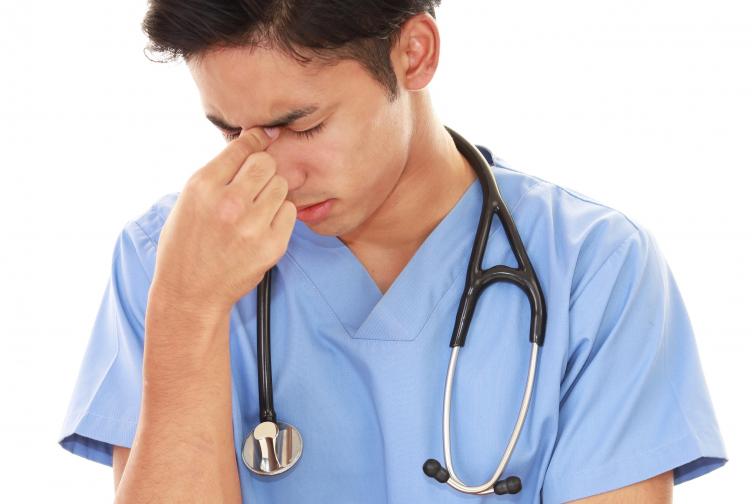 In a 1999 radio address, then US President Bill Clinton told the American people, “mental illness is nothing to be ashamed of, but stigma and bias shame us all”.

Much has been reported about the issue of mental health among doctors and medical students internationally and in Australia, and yet the reluctance of some members of the medical profession to seek help remains.

The National Mental Health Survey of Doctors by beyondblue, released in October 2013, showed higher rates of psychological distress and attempted suicide among doctors, compared with both the Australian population and other Australian professionals. It also found higher rates of general and specific distress among medical students in comparison with the general population.

The survey also demonstrated the stigma many in the medical profession believe is associated with seeking treatment for mental health problems. Forty per cent of respondents reporting they felt medical professionals with a history of mental health disorders were perceived as less competent than their peers, 48% believed they were less likely to be appointed to a role compared with doctors without a history of mental health problems, and 59% believed that being a patient was embarrassing for a doctor.

It’s time those perceptions shifted, so that doctors and medical students trying to cope with mental health issues can feel comfortable and supported in seeking treatment.

Seeking help for mental health issues should have very positive outcomes for the doctor concerned.

For doctors to receive appropriate support for mental health problems, and indeed all health issues, they must seek independent, objective advice, and be aware of the risks of self-diagnosis and self-treatment.

A 2015 online poll of doctors by the Medical Observer found nearly 40% of respondents did not have their own GP, almost 50% wrote prescriptions for themselves and 30% had not had an independent health check for two years.

The Medical Council of NSW has published its Guideline for self-treatment and treating family members. It encourages all doctors to have their own, independent GP and advises doctors against initiating treatment for themselves or their family members.

In most states and territories, mandatory reporting laws about treating doctors reporting health practitioners who seek help have been seen as a barrier to doctors and medical students accessing support and treatment for mental health problems.

It is pleasing to see the nation’s Health Ministers moving towards a reform which may see all states and territories adopt Western Australia’s approach which allows a doctor to treat a health practitioner patient without being required to notify the authorities.

However it must be remembered that the purpose of mandatory reporting is to act as a safeguard when doctors and medical students are unwilling, or unable, to seek help and manage any risk to public safety. It is not to punish them for doing so.

In my opinion the "problem" of mandatory reporting has been due to a misinterpretation of the law. It is widely believed that mandatory reporting means that there is a responsibility to report any doctor with a serious illness, particularly a mental health one.

The Health Practitioner Regulation National Law (NSW) states that it is only when a practitioner has formed a reasonable belief that another doctor has placed the public at risk of substantial harm in the practice of the profession because of their impairment that they are required to make a mandatory notification.

Education providers also have an obligation to make a mandatory notification if they have formed a reasonable belief that a student undertaking clinical training has a health issue that may place the public at substantial risk of harm.

The formation of a reasonable belief that a doctor has not placed the public at harm will be influenced by factors such as whether the doctor has sought and is receiving appropriate treatment and advice, has insight into his/her illness, has temporarily withdrawn from practice while unwell, and if he/she has self-notified to the relevant regulatory authority.

If the mandatory reporting of unwell doctors by health practitioners who have formed reasonable beliefs that the doctors have placed the public at risk of substantial harm in the practise of their profession because of their impairment is repealed, one would hope that health practitioners with such beliefs would continue to report such doctors in the interests of public safety.

For those doctors and medical students with mental health issues who self-notify or who are the subject of a notification to the Australian Health Practitioner Regulation Agency, there are confidential, remedial, non-disciplinary programs, which differ from state to state, that are designed to support doctors remaining in practice, and students to remain in study, while receiving appropriate treatment provided it is safe for them.

In NSW, the Medical Council’s health program aims to support and monitor doctors affected by health issues, including mental illness. Most doctors and students in the program remain in practice or study, subject to conditions on their registration designed to ensure public safety, while they undertake treatment and rehabilitation. Participants undergo regular independent medical assessments and reviews.

As they progress in their rehabilitation and recovery, the conditions are gradually eased, until the Medical Council considers they no longer need to be in the health program.

While return to unconditional practice is a goal of the program, some doctors, for example, those with a recurring psychiatric illness, may remain on the program indefinitely, albeit with low level conditions and occasional review by the Medical Council. Only a small percentage of doctors re-enter the program after exiting.

While we encourage everyone with mental health issues, including doctors and medical students, to seek help themselves, we know some may remain reluctant to seek treatment. With this in mind, a doctor who believes that a colleague may be suffering in silence should encourage and assist the doctor to seek help and, if necessary, self-notify.

By reaching out to our colleagues suffering in silence, we should see a shift in attitudes associated with doctors and medical students who seek help with their mental health.

The purpose of Bill Clinton’s radio address was to announce a mental health awareness campaign to “replace stigma with acceptance, ignorance with understanding, [and] fear with new hope for the future”.

It’s a goal the medical profession should also be striving to achieve for our own members.

Dr Dorney is the former Medical Director at the Medical Council of NSW. This is an updated version of an article published in the Medical Observer, 16 September 2015.​