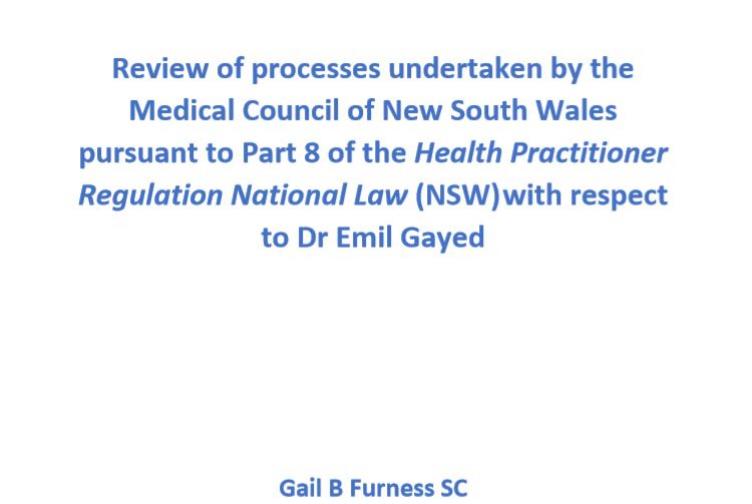 In June 2018, the Medical Council requested Ms Gail Furness SC inquire into the actions of the former Medical Board, now the Medical Council, in response to concerns raised about the professional performance of a NSW obstetrician and Gynaecologist, Dr Emil Gayed.

Ms Furness has now completed her inquiry and has prepared a report which deals with the response of one component of the regulatory system, the former Medical Board, which became the Medical Council of NSW in 2010. The report covers the period from 1994 to 2017 when the Council suspended Dr Gayed’s registration.

At the same time, the NSW Health Secretary appointed Ms Furness to review the actions of five Local Health Districts at which Dr Gayed was appointed between 1990 and 2016 in respect of their management of him. The time for delivery of that report has now been extended to 31 January 2019.

The Council acknowledges that the response of health regulators to numerous complaints about Dr Gayed did not prevent his substandard professional performance for several years. Aspects of his management by the Medical Board, and later the Council, were unsatisfactory.

The Council recognises the importance of prompt, relevant action in response to a finding of unsatisfactory performance by medical practitioners and is committed to improving the effectiveness of its regulatory functions in protecting the public.  Since it was established in 2010, the Council has made necessary modifications to its performance and monitoring programs.  Ms Furness’ recommendations are a valuable contribution to the revision of the performance program, currently underway.

The Medical Council recognises that in discharging its functions, it is ultimately accountable to the public of NSW. The report is therefore released in full in the interests of transparency.

You can view the full report here: